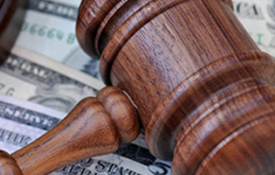 The hard part for Plantation attorney Robert E. Gluck was getting the jury to believe.

When he entered the courtroom, Gluck had to sell a difficult premise: A case teetering on his ability to convince the jury that his client's hip and ankle injuries, which went undiagnosed for years despite medical treatment, were the result of an old traffic collision on Interstate 95.

Opposing counsel was more confident. Its strategy turned on disputing causation and introducing multiple other explanations for the injuries in the years since the accident. Its best settlement offer was $100,000 — not nearly enough to cover years of medical expenses.

As it turned out, a Miami jury sided with Gluck and awarded his client $1.2 million.

Gluck represented Sasha Madrigal, who was involved in a highway crash in February 2012 with Mitchell's Lawn Maintenance employee Jose Ernesto Mendoza. Madrigal claimed she was driving southbound in the express lane on Interstate 95 when Mendoza crashed into the car in front of him. The impact caused Mendoza's 2005 Ford F-150 pickup truck to careen past the plastic barriers dividing the main lanes from the express lanes, causing a collision with Madrigal's 1999 Honda CRV, according to the complaint.

"That's everyone's worst nightmare, driving along in the express lanes and someone comes right over the barriers in front of you," Gluck said.

Doctors initially diagnosed herniated disks in Madrigal's lower back — a common injury after the violent impact of a traffic collision. For years, they assumed a connection between the back injury and hip and foot pain Madrigal suffered until a magnetic resonance imaging scan revealed a ruptured tendon in her ankle and a hip labral tear. Madrigal medical bills mounted, passing $200,000 after two corrective surgeries.

In court, defense attorney Lynn Bagley-Nader, Miami staff counsel for insurer Travelers, rebutted with arguments that Madrigal had suffered injuries unrelated to the crash in the years that followed the accident. For instance, Bagley-Nader argued Madrigal had reinjured her left ankle at the gym and needed a second ankle surgery.

At trial, Gluck argued his client had no prior complaints of back, hip or ankle pain before the accident and the injuries were the direct result of the crash, despite the delayed diagnosis. He believes a sympathetic plaintiff helped him clinch the victory.

Madrigal, a young mother of two, had a 3-year-old and a newborn at the time of the accident. On the day of the crash, she was headed to pick up her son from day care after registering for college classes. In the time it took the case to get to trial before Miami-Dade Circuit Judge Jose M. Rodriguez, her attorney said Madrigal juggled child care, college, three major surgeries and dozens of trigger-point injections as part of a pain-management regimen.

The jury awarded $255,000 for past medical expense, $370,000 for future expenses and $575,000 for past and future pain and suffering, disability or physical impairment, disfigurement, mental anguish, inconvenience, aggravation of a disease or physical defect, or loss of capacity for the enjoyment of life.

"It's so hard to get money from a jury these days, but when a client is working so hard to overcome her injuries, juries sometimes notice," Gluck said. "The jury saw it all. She kept going to school and trying to better herself for her kids. This client deserved this verdict … because of how hard she worked to overcome all the hardships."